I. Concept of Startup India:

Startup India campaign is based on an action plan aimed at promoting bank financing for start-up ventures to boost entrepreneurship and encourage start-ups with jobs creation. The campaign was first announced by our Prime Minister Shri. Narendra Modi on 15th August, 2015.

It is focused on to restrict role of States in policy domain and to get rid of "License Raj" and hindrances like land permissions, foreign investment proposal and environmental clearances. It was organized by Department of Industrial Policy and Promotion. The government has already launched PMMY, the MUDRA Bank, a new institution set up for development and refinancing activities relating to micro units with a refinance fund of Rs. 200 billion.

A startup is an entity, private, partnership or limited liability partnership (LLP) firm that is headquartered in India, which was opened less than five years ago and have an annual turnover less than Rs. 25 Crores. To be eligible for considering as startup, the entity should not be formed by splitting up or reconstruction and its turnover should not have crossed Rs. 25 Crores during its existence.

A Chart depicting the eligibility criteria for Startup Companies: 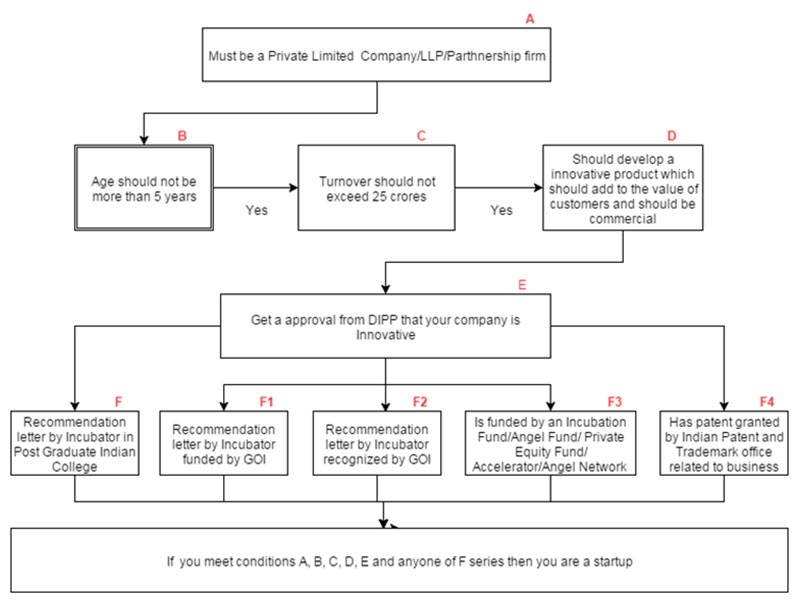 Venture capital funds from abroad and angel investors are proving to be a big boon for Indian startup story. Indian startups such as Flipkart, Olacabs, Snapdeal, Hike, Shopclues, Freecharge, Inmobi etc. receive various rounds of follow-on financing as well either from their existing investors or from any new investor. These various rounds of funding also help these firms to hire more talent into the company. This helps the company to grow strategically and also add some more experienced people in the firm.

SoftBank, which is headquartered in Japan, has invested US$ 2.00 Billion into Indian startups. The Japanese firm had pledged the total investments at US$ 10.00 Billion. Google declared to launch a startup. Oracle on 12th February, 2016 announced to set up nine incubation centers.

Apart from funding, mergers and acquisitions are also helping these startup companies to grow by acquiring new capabilities directly and expanding into the market share of the acquired company. The best example of this could be buying of Myntra, an app based shopping portal by another technology giant Flipkart to gain the market share. Snapdeal recently acquired Freecharge to grow into the area of mobile payment gateways, since mobile payments are a next hot spot sensed by various startups presenting immense opportunities for further penetration. Not only in India but also internationally tech giants have used acquisition of companies as a way to maintain their position of market leader and also as a way to enhance diversification. An example of this could be acquisition of messaging app Whatsapp by another giant Facebook.

Indian government is also taking several steps to build an environment which is suitable for startups, since small businesses can play a very important role to develop and boost Indian economy in the future. In the Union Budget of 2015, government has established a process or a mechanism known as Self Employment and Talent Utilization to support all the aspects of startups right from their seed financing stage to their growth stage. It is also anticipated that government may roll out a Rs. 2,000 Crores fund to provide seed capital to startups related to IT and biotechnology.

Under the scheme, a group of start-ups will acknowledge an MOU with the prestigious institutions and will also establish the start-up centers in the campus. NIT-Silchar is one of the institutions of the country to have joined the program. IIT Madras is also linked with this campaign. The institution has been successfully managing seven research parks that has incubated many start-ups.

The quality of education in the institutions of the nation is always questioned and found not matching with the organizations' standards for the required skillset and they have to expend on training the fresher’s. The country has also launched the Skill India campaign for addressing the issue.

Hence, taking into consideration all the above developments, it can be concluded that indigenous startups will not only make the lives of the people easier through their affordable and convenient services but will also act as a major booster for the development and the progress of the Indian economy.